The Asari Civilisation is a Stellaris mod that adds the Asari species from Bioware's Mass Effect franchise into the game! They come with a custom shipset, several portraits (and a lot of clothes), pregenerated empires and more!

- The Asari Republics: The iconic Asari government. Based on the eezo-rich planet of Thessia, the apex of democracy and the beating heart of galactic love, the Asari Republics seek to dominate the galactic culture and diplomacy, but they are not afraid to wave giant dreadnoughts around if that is what it takes to keep the peace. Also comes with the Athena Nebula system initialiser, containing five lore-correct(ish) systems, and a homeworld full of unique planetary features![/*]
- The Asari Corporate Interests: Influential individuals and powerful corporations operating out of the asari colony of Illium, the entrepot between civilised galaxy and untapped resources of the lawless Terminus Systems. The entities that control it make up for in wealth and connections what they lack in morals, having created a decadent yet orderly capitalist paradise. Comes with the Crescent Nebula system initialiser that contains four lore-correct(ish) systems, and a homeworld full of unique planetary features![/*]
- Features AI support! When played by AI, the two prescripted factions have their own behaviour and diplomatic lines![/*]
- They will not spawn as AI empires by default, but you can change that by enabling these optional modules:
> Spawn Asari Republics
> Spawn Asari Corporate Interests[/*]

Civic; requires some degree of Xenophile and Egalitarian

The society of Thessia thrives on being connected, both within their all-inclusive e-democracy and through cultural exchanges with foreign powers. The Asari culture has a way of influencing all it touches.
> Gain a small amount of monthly Unity based on the Unity income of every empire with which Asari Republics have a Commercial Pact or share a Federation with. The other party gains increased Unity production and Xenophile attraction.[/*]
- Illium à la Mode:

Civic; requires some degree of Xenophile and Materialist

A beaconn of glitzy, glamorous radiance so blinding that the inequity, exploitation and greed that fuel the machine almost go unnoticed. Illium prides itself on being the legal market that drives the black market out of business by providing almost anything one can imagine as long as one doesn't mind a bit of invasive bureaucracy.
> Planets and Branch Offices owned by Asari Corporate Interests gain a scaling bonus to Trade Value based on excess Amenities available.[/*]

The Asari are a monogendered species that reproduces parthenogenetically. A partner is required, but no fertilisation takes place. Instead, their genetic map is used to randomise the genetic makeup of the offspring who otherwise would be a clone of her mother.
Naturally occuring cellular rejuvenation also grants the Asari extraordinary longetivity, but brings with it many biochemical, psychological and social changes over the course of their long lives.
> This trait is inherent and exclusive to the Asari species. It cannot be added or removed manually and will be retained through Genetic Modification and Xenocompatibility hybrids.
> It dramatically extends leader lifespan, but also significantly increases recruitment and upkeep cost. Note that the starting age of leaders will also be much higher, most will spawn between 250 and 750 years old![/*]
> For pops, it imposes a large baseline growth penalty, but allows to occasionally take over growing pops of alien species living on the same planet. Lack of genetic diversity can rarely lead to Ardat-Yakshi overpopulation.[/*]
- Sophisticated Needs:

Whether a byproduct of their culture or long lifespans, or a combination of both, Asari seem to just demand more out of their intellectual stimulation. It may be the one quality that less "sophisticated" species don't find particularly endearing about them.
> Pops with this trait requite more Amenities.[/*]
- Natural Biotics:

All asari possess genetic capacity for Biotics. While not all choose to hone their abilities, those who do can be great strategic assets, especially in large numbers. Biotic talent is mandatory for military service.
> This trait increases army damage, cost and upkeep, and grants access to short-lived but powerful planetary Decisions that benefit from large numbers of Biotic pops.[/*]

A huge assortment of customisation options! You should never see two identical pops on a planet or two identical leaders in your empire!

- 40+ portrait variations: Based on Liara, PeeBee, Morinth and more![/*]
- 90+ outfits and counting! Each type of leader draws from its own pool of vocation-appropriate outfits, and even pops change clothes based on their jobs! Uniforms for soldiers, cute maid outfits for servants![/*]


- Thanks to Nessa who worked tirelessly and tolerated my constant fangirling and nitpicking, the Asari have access to a fully featured custom shipset![/*]

Be sure to check out other mods by Team Nessassity!

Especially our other Mass Effect mods!


[h1]If you like what you see, consider supporting us directly! 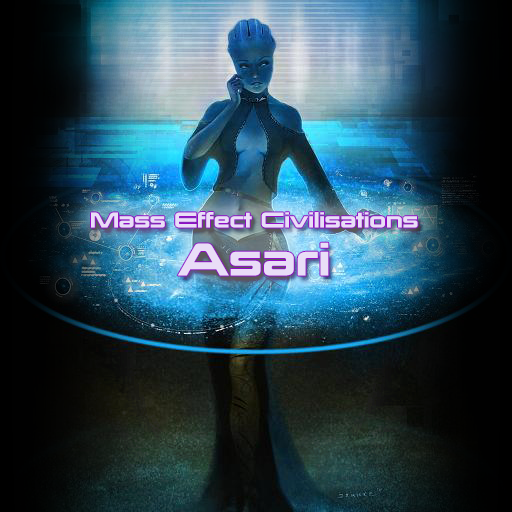