- The system could work in two modes.

Search Mode
Walk
Only block within range and connected to the grid of the BaR-System or grids connected via connector, merge blocks, pistons, motors, .. are detected (attached grids via landing gears don't count)
Fly
All blocks in range of the BaR-System are detected, so a fly by ship/vehicle could be repaired. The drawback of this mode is its higher electric power consumption (10kW instead of 2kW). Collecting floating objects is only availabe in this mode

- There are three modes for Welding / Grinding priority.

Work Mode
Weld before grind
Grinding won't start until all blocks are build/repaired. Use this mode e.g. for a (ship) factory where the 'connecting' blocks between projector and build grid should be removed after complete build.
Grind before weld
Grind will start a soon as blocks to grind are detected. Use this mode e.g. while placing new blocks and you like to remove wrong placed blocks immediately after marking them.
Grind if weld get stuck
Grinding will start when all blocks are build/repaired or no material is available to continue welding. Use this mode e.g. if you like to retrieve missing materials by grinding 'old' ships.

- The working range is individually adjustable in all directions (left,right,top,bottom,forward,backward).
- The build/repair/grind (enemy blocks) priority could be adjusted by block classes:
AutoRepairSystem, ShipController, Thruster, Gyroscope, CargoContainer, ControllableGun (Gatling gun/turret, Missle turret), EnergyBlocks (Reactors, Solar panels, batteries), Programmable Block (Programmable- and timers blocks), Projector, Functional Block (Airvent, Motor, ..), Production Block (Arc Furnace, Refinery, ..), Doors, ArmorBlock (Armor block and all switched off blocks)
- Ignore Color feature: If you have intentionally unwelded blocks, you could setup a color in the terminal settings of the system. Blocks colored with that color would not be repaired/build (projected blocks will be created, but not fully welded).
- Grind Color feature: Blocks colored with that color would automaticly be grinded. See Work mode for details on weld/grind order.
- Janitor feature: If this function is enabled the system grinds blocks in range not owned by you or your fraction. This allows cleanup the 'garbage' in its range. While grinding these 'enemy' block the same priority as repairing blocks is used, so e.g. if "ControllableGun" is the highest priority enemy weapons will grinded first. This makes the BaR-System also an effective defence system. (For server admins this function could be switched off separately).(New)Options, that control the behavior while grinding Enemy/Neutral blocks.
Janitor grind to disable only: Grinding stops as soon the block is out of order.
Janitor grind to hack only : Grinding stops as soon the block hacked.
- Collect floating objects. The system could also collect any kind of floating objects in range. The priority of components, ore, ingot, stone, gravel could be separately changed/switch on/off.
- Needed materials for build/repair are automaticly pulled out of the connected conveyor/container system and/or the internal inventory (If "Use conveyor" is set).
- Materials from grinded inventories are automaticly pulled into the BaR-System and if the inventory of the BaR block is full, automaticly pushed into the connected containers.
- 'Friendly' damage detection. Blocks grinded by you or a fraction member will not be repaired immediately. There is a timeout of 60[s]. This gives you the chance to grind and remove the block. If you grind it by mistake, it will be repaired after the timeout. (Works for angle grinder and ship grinder)
- System is fully controlable via terminal
- Queuing of missing materials, displaying system state on panels is available via scripting interface.
An out of the box script is available, for details please see Nanobot Build and Repair System Queuing: http://steamcommunity.com/sharedfiles/filedetails/?id=867822734
- System could be controlled also via scripting interface.
This allows full control over the range, welding order, ignore special blocks, missing materials, ..
A separate demo blueprint is available. It shows some of the scripting features of the block (including queuing items inside assemblers). See Demo Automatic Build and Repair Station: http://steamcommunity.com/sharedfiles/filedetails/?id=867483764
- Status lights showing the current state of the block:

- Power usage (changeable via settings file)
20W Standby (collecting information about the blocks/items to build/repair/grind/collect)
+2kW if welder is working or 1.5kW if grinder is working
+10kW in 'fly' mode or + 1kW in 'walk' mode if something to transport.
(small version block always 1/3)

- Welding and grinding speed is a little bit less than 'normal' ship welders/grinders but higher than hand welder/grinder (Default settings). But the transportation of the materials is the bottle neck of the system. So build/grind time increase with the distance between the BaR system and the welding/grinding block.
- To improve the speed you could place the block nearer to its target(s) or use more than one block. They will work together (not necessarily on the same block, but the overall performance will better in any case)
- It could be also a good idea to have two system overlapping each other, so in case one system gets damaged they could repair each other.
- The system itself is totaly safe and will never harm anybody walking or sitting in range of the system. You could also work on the same block without any danger.

Have fun.
If you like the mod don't forget to rate it.
Comments, suggestions are always welcome.
If you have trouble, please make sure to check the pinned discussion FAQs / Trouble shootings before posting.
For bugs, problems please use the pinned discussion Bug reports (it is easier to track). 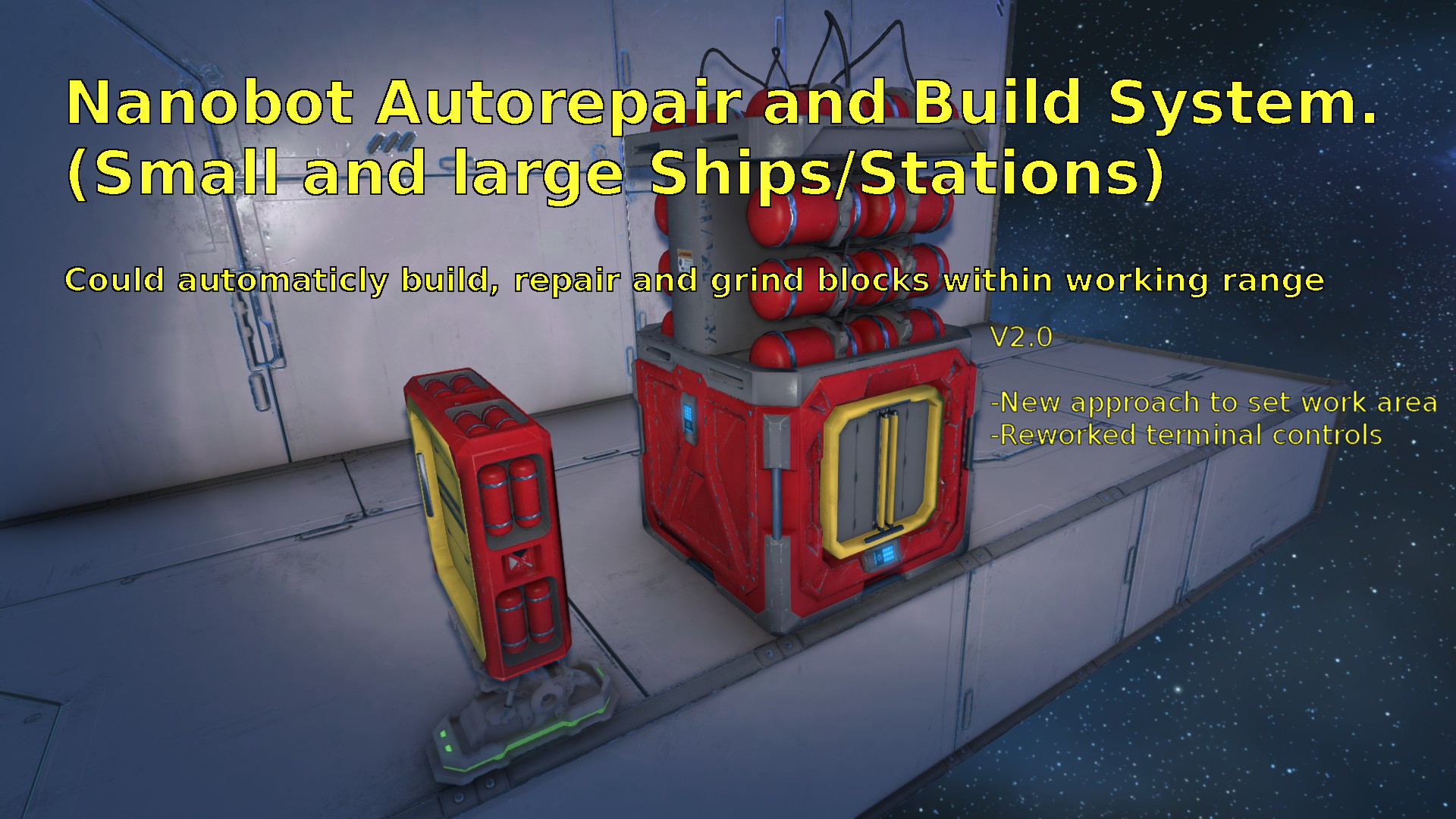